So God’s done it again. Thousands of years after he got fed up with human sin and decided to flood the World, he’s decided that enough is enough and that’s why Britain got those floods over Christmas. Odd time to choose, I thought, Christmas Day floods, surely, a bit like shooting yourself in the foot, God. 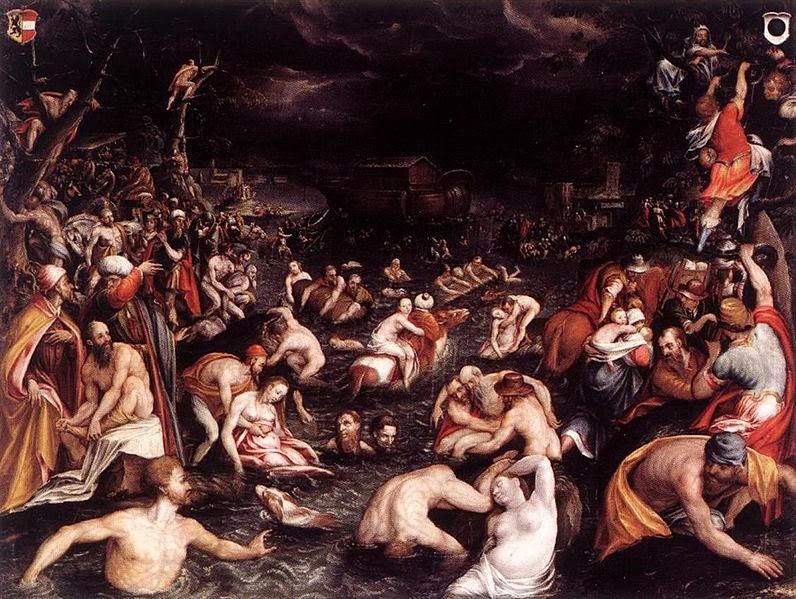 It was quite a thing the first time, when the only people saved were Noah and his family along with pairs of breeding animals that went in two by two on to Noah’s cunning DIY ark.

When God had drowned all the sinners (everyone that is, except Noah and his family) the water subsided and the ark landed on the top of Mount Arafat with all the human and animal passengers safe.

With all the sinners drowned,  God decided that enough was enough and he promised not to do it again and as a sign of his promise he stuck a rainbow in the sky.

Now God has been at it again but this time, apparently, He just targeted Britain and,  no arks this time, just unpleasant floods in various parts of the UK, including Henley-On-Thames. Anyway there wasn’t enough warning for one David Silvester, our modern day Noah, to build an ark or to round up breeding pairs of our animals but luckily the devastation didn’t wipe out the entire country and all life this time. We don’t have that many wild animals in the UK any more so it wouldn’t have taken David that long to find couples of foxes, badgers, water voles, rats, moles, mice, sand lizards, frogs, toads and newts etc. plus the farm animals of course. I suppose if he had built that ark, he’d be shipwrecked now somewhere near Gravesend.

David Silvester, a United Kingdom Party (UKIP) councillor from Henley-on-Thames, may not have sailed off to Mount Arafat or Gravesend but he knows all about God’s flooding intentions. According to David, God is angry with Prime Minister David Cameron for allowing the recent Same Sex Marriage Bill to go through Parliament. Apparently this is the most sinful act since Noah – or before the flood as they say. Looking at the flood damage in Henley, I suspect God might be slightly less angry this time round.

I was relieved and surprized to discover that Mr Silvester’s cranky antediluvian beliefs are too ridiculous even for the United Kingdom Party (UKIP) and he has been suspended from the party just as, last year, the UKIP MEP (Member of European Parliament), Godfrey Bloom was sacked for describing the countries where Britain sent aid as Bongo-Bongo Land. The UKIP leader, Nigel Farage,  has now said that he will vet the party to make sure there are no “extremist, barmy or nasty” views. At this rate there’ll be no one left, Nigel. Maybe he could build them an ark and send them off somewhere over the rainbow.

The rainbow, however, remains a sign of hope after the deluge – so maybe God isn’t so annoyed about same-sex marriages after-all.

Now that Mr Silvester isn’t quite so busy, maybe he should just sit back and enjoy a sing-a-long about the ark. What puzzles me is that when all those animals went in two by two, how come Noah even got those giant pandas to breed?

It is now available as a paperback or on Kindle (go to your region’s Amazon site for Kindle orders)
You can order the book from the publishers, Ward Wood Publishing:
http://wardwoodpublishing.co.uk/titles-fiction-colin-bell-stephen-dearsleys-summer-of-love.htm
…or from Book Depository:
http://www.bookdepository.co.uk/Stephen-Dearsleys-Summer-Love-Colin-Bell/9781908742070