If you have been to London this year, you are bound to have seen the distinctive poster for the Royal Academy of Arts’ giant exhibition of works by Édouard Manet (1832-1883), Manet Portraying Life which finishes this Sunday, 14th April. If you have a soul, you would have noticed too the provocatively beautiful woman enticing you to go to this splendid exhibition of many of Manet’s portraits.

I was lucky enough to go there last Saturday when Spring finally decided to arrive in the UK and when London sprung into gear to look its best. If you haven’t had the privilege of meeting this lady before, let me introduce you to the artist and Manet friend, the alluring Berthe Morisot (1841-1895). It is one of the images that you will keep in your head long after this exhibition closes. Looking at it, there is very little  doubt what she thought of Manet or what he thought of her. We are almost intruding on a very steamy moment. But no apologies needed – Manet likes to embarrass his audience. The exhibition is devoted exclusively to his portraits so you’ll be disappointed if you go along expecting to see the most well-known of his works but you’ll soon recover seeing the magnificent series of paintings that show how his style moved on from his admiration of the great Spanish masters of portraiture, Velasquez and Goya to the radical modern style that made him the father of 20th Century art.

His hurriedly executed portrait of Berthe, when she was in deepest mourning for her father, is both intimate and chillingly emotional but it is also an excuse, always important for the artist, to experiment with the infinite variety of his use of black. Berthe Morisot became Berthe Manet but she achieved this by marrying Manet’s brother Eugène. Historians are still undecided about the true nature of her feelings for Édouard but the expression in many of his portraits of her leaves very little to the imagination.

Manet’s favourite model, the woman we all know, even if we don’t realize it, from his most famous paintings, was Victorine Meurent (1844-1927) an artist and cabaret singer who as well as modelling  for Manet, also sat for Edgar Degas. Her haunted expression, a Manet speciality, was emphasised by her extremely pale skin and her strikingly red hair. She is the naked woman in Manet’s  most scandalous paintings, Le déjeuner sur l’herbe and Olympia.

Victorine Meurent, c.1862 (Museum of Fine Arts, Boston, USA)
In his many portraits of Victorine, we are encouraged to feel that she has secrets that we can only guess at but which she will never divulge.

She last appears in his famous painting The Railway where she looks up from her book and sadly stares at us in silent communication. She lived the rest of her life with a woman called Marie Dufour who burnt all Victorine’s possessions and, I suspect, secrets, when she died three years after her friend.

Manet’s only official student was the artist Eva Gonzalès (1849-1883) who often modelled for her teacher mostly famously in this rather awkward portrait where she is very obviously posing as a painter in what we can only assume to be a deliberately awkward position and dressed rather impractically in an expensive-looking white dress. Here white is Manet’s new black. The painting is not her’s  – it is one of Manet’s. She, like Victorine, is not so much concentrating on her work but looking into space and contemplating something that brings a smile to her lips. Sadly she died in childbirth only months after Manet’s death. 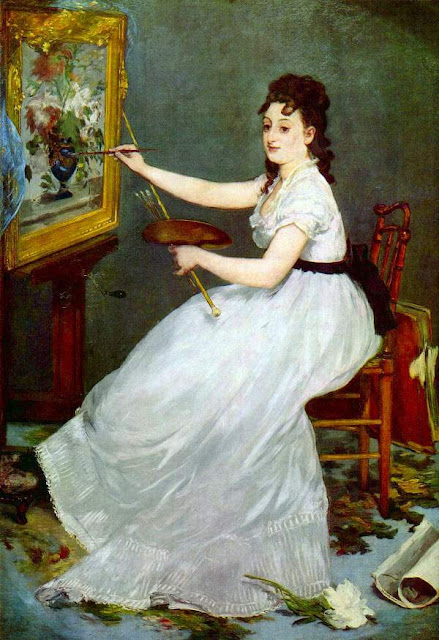 Much less glamourous than these women but Manet’s most constant companion and model was his wife, the plumply maternal Dutch pianist, Suzanne Leenhoff (1829-1906). She was an impressive musician, encouraged by Liszt, with a quick wit and lively sense of humour. She was an equal partner  at the manet’s Tuesday and Thursday soirées and is frequently the model for his portraits and also in his scenes of contemporary life. In spite of the many beautiful models in Manet’s life, Suzanne apppears to have remained the object of his deepest affection.

She admired the so-called “New German Music”, especially the works of Wagner and Liszt and may have had passionate discussions on the subject with her husband and their great friend, the poet, Charles Baudelaire. If I could time travel to Paris in the 1870s then I would’ve loved to have met this interesting woman.

I particularly like the jaunty way she crosses her leg in the picture of her and her (and maybe Manet’s) son Léon in the apartment in Arcachon.

She is also seen blurrily with her widowed mother-in-law in Manet’s poetically mystical painting The Swallows – Suzanne seems to have always been on hand to fill a scene or two.

Manet obviously loved women as we can see in the many charmingly alluring portraits that he made of them – seemingly just for the pleasure of painting them.

His pastel portraits were new to me and their delicacy not only heightened his subject’s femininity but also their individual personalitites. Here too though is that distant look seen most famously in his picture A Bar at the Folies-Bergères (Courtault Institute, London).

It was interesting seeing his mastery of the simple drawn line too in this expressive but lightly sketched Girl in a Summer Bonnet. 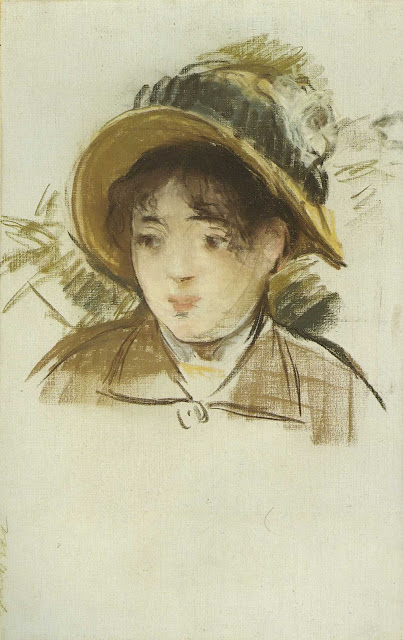 Girl in a Summer Bonnet (Jeanne Demarsy), c.1879 (Collection of Diane B, Wilsey)

Manet’s portraits of beautiful women demonstrate his appreciation of women as they were emerging in the late 19th Century with a new freedom. Sadly his appreciation of women may also have led to his premature death from syphilis. The women in his pictures are true personalitites, even the sweetly pretty faces in his pastels. He brings out the personality too of vivacious little six-year old Lise Campinéanu (1872-1949). She can barely retrain herself from leaping out of that pose and rushing across the room to tell us just how exciting it is to be painted by the great Monsieur Manet. I’ll take a look at some of the other Manet’s other portraits tomorrow.

It is now available as a paperback or on Kindle (go to your region’s Amazon site for Kindle orders)
You can order the book from the publishers, Ward Wood Publishing:
http://wardwoodpublishing.co.uk/titles-fiction-colin-bell-stephen-dearsleys-summer-of-love.htm
…or from Book Depository:
http://www.bookdepository.co.uk/Stephen-Dearsleys-Summer-Love-Colin-Bell/9781908742070
…or from Amazon:
http://www.amazon.co.uk/s/ref=nb_sb_noss?url=search-alias%3Daps&field-keywords=Stephen%20Dearsley’s%20Summer%20Of%20love
BLUE NOTES, STILL FRAMES
My second novel, Blue Notes, Still Frames, will be published in 2015 by Ward Wood Publishing. It begins with Joe Edevane, a Brighton street busker with surprizing powers who borrows a towel from well-heeled strangers, Alan and Rachel, for his Goth girlfriend, Victoria, and begins a chain of events that changes all of their lives.

Every Day Poets Magazine
Every Day Poets
I have various poems of the day published in this 365 days a year poetry magazine.
http://www.everydaypoets.com/?s=Colin+Bell