Dirk Bogart in  the 1971 Visconti film Death In Venice

I haven’t been well over the last few weeks and, without being exactly a hypochondriac,  my mind does go back at these times to that great death scene in the photograph above.  The famous death In Venice is, of course, by German writer Thomas Mann (1875 – 1955). Well, lots of Venetiains die in Venice, of course, but since Mann’s book there’s been a romance about foreigners dying there. Thomas Mann’s 1912 novella Death In Venice (Der Tod in Venedig),  about a writer, Gustav von Aschenbach with writer’s block who takes a holiday in Venice, at its elegant Lido beach, where his depression is lifted by the hope and beauty personified in an aristocratic Polish boy, Tadzio, there on holiday with his family.

Thomas Mann did take such a holiday himself, but he didn’t die there, in 1911, and, apparently, was inspired by a young Polish aristocrat,  Baron Władysław Moes (1900 – 1986) who was probably the original for Tadzio..

Later Mann’s story became an even better known film by Luchino Visconti (1906 – 1976), Death In Venice (Morte a Venezia, 1971) starring Dirk Bogart where Mann’s writer is turned into a famous Austrian composer. Soon after the film it became an opera, Death In Venice (1973) by Benjamin Britten (1913 – 1976). It’s unusual for three works of art from three different art forms could all achieve true greatness.

Visconti made atmospheric use of music by the Austrian composer Gustav Mahler  (1860 – 1911) in his movie and there are still people who think the film was about Mahler and that the great composer died in Venice which he didn’t – he died in Vienna in 1911, the year before Thomas Mann’s novella. Another composer, Igor Stravinsky (1882 – 1971), is thought by some to have died in Venice but he didn’t either – he died in New York in 1971 in the same year as Visconti’s film was released. Stravinsky was buried at his wish in Venice next to the grave of his friend and mentor, the great Ballet Russe impresario, Serge Diaghilev (1872 – 1929)  who really did die in Venice in 1929 as did the American Modernist poet, Ezra Pound (1885 – 1972). Venice and death seemed to be in the air in the 1970s.

No, I’m feeling a lot better today and, putting all these deaths in Venice to one side, the really great foreign composer to die in Venice was Richard Wagner (1813 – 1883) who rented a first floor apartment on the Grand Canal in the magnificent Palazzo Vendramin Calergi for the winter months after his last opera Parsifal was premiered at his Bayreuth opera house in Bavaria.

He arrived there in September 1882 with his wife Cosima (Franz Liszt’s daughter), their children and their staff of servants but Wagner was unwell and he gradually declined under the strain of a heart condition.

Two months later, in November 1882, his father-in-law, the great pianist and composer, Franz Liszt came to stay – he didn’t leave until January 1883, he wasn’t the first or last in-law to outstay his welcome. Only two years older than his son-in-law, Liszt too was in declining health and had become increasingly obsessed by death and, almost from the start, was haunted by the sight of funeral gondolas making their way past the palazzo on their way to the cemetery of San Michele.

Opinion is divided on how well the two men got on together, Wagner owed Liszt a lot both musically and professionally but he may well have been irritated by the hours of piano music that echoed through the apartment as the elderly Liszt sat at the keyboard composing one of his last great pieces, La lugubre gondola, which is a musical impression of those melancholy gondolas that were often seen passing the apartment’s windows.

Whether this was prophetic or just tactless, we will have to decide for ourselves but when Liszt left Venice for Budapest in January 1883, Wagner had only a month to live and then his coffin was placed in one of those very gondolas that Liszt had described so vividly. Wagner’s body was taken to Venice’s Santa Lucia railway station by gondola and then by train to his home at Bayreuth, Bavaria, where, three years later, his father-in-law would die. In case you wonder why I’m going on about Wagner’s death today, it’s because on my journey through the history of music, I’ve reached the year 1883 and it’s time to say goodbye to some of the composers who dominated the musical world in the 19th Century, Wagner being by far the most influential and controversial. 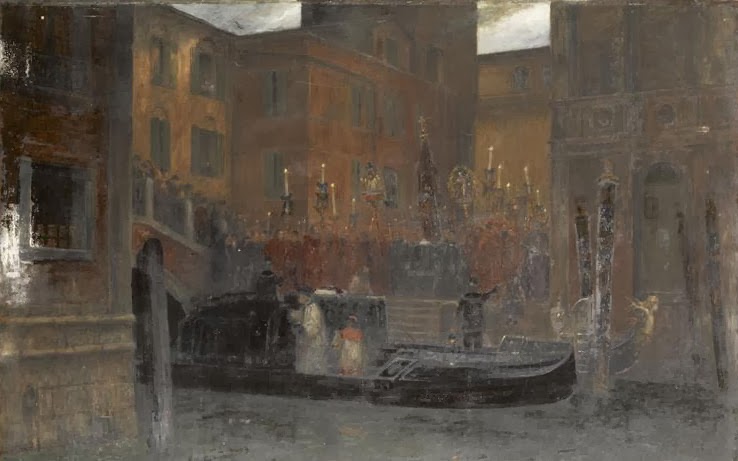 So for all the stories about deaths in Venice, Wagner’s is the one nearest to Thomas Mann and Luchino Visconti, Tadzio apart. He may not have seen Tadzio on the beach but he is said to have been enraptured by a young English opera singer at this time, Carrie Pringle (1859 – 1930), one of the Flower Maidens in the first production of Parsifal – someone whom Cosima Wagner refused to allow into the Venice apartment.

With Wagner dead, Carrie Pringle found her contract at Bayreuth cancelled and her career in ruins. She didn’t die in Venice either but lived on until 1930 and died just down the road from where I used to live in Kemptown, Brighton, UK.

So even though we will always associate the Adagietto from Mahler’s Fifth Symphony with Death In Venice as used by Luchino Visconti in the film, the music for the real death in Venice, is Liszt’s La lugubre gondola played here in its final, paired down, enigmatic and harmonically adventurous version by that fine Lisztian pianist, Arnoldo Cohen:

If you can’t resist hearing the Mahler with Visconti’s movie images, here’s a special treat, the final scene from the film. I can watch this again now that I’m feeling better myself.

It is now available as a paperback or on Kindle (go to your region’s Amazon site for Kindle orders)
You can order the book from the publishers, Ward Wood Publishing:
http://wardwoodpublishing.co.uk/titles-fiction-colin-bell-stephen-dearsleys-summer-of-love.htm
…or from Book Depository:
http://www.bookdepository.co.uk/Stephen-Dearsleys-Summer-Love-Colin-Bell/9781908742070