I have just returned from my Italian holidays staying in the small Italian Riviera town of Santa Margherita Ligure that sits happily on the Mediterranean sea shore along the coast from Genoa, Italy’s largest harbour and just next door to Portofino, a small village that has turned itself into a millionaires’ haven. Santa Margherita Ligure has been an elegant seaside resort since the 19th Century but got truly “discovered” by the international “jet set” during the 1950’s when a relatively forgotten part of Europe became “the” place to be seen whether you were a hollywood star or a literary giant like Ernest Hemingway or, ssh, Ezra Pound. It was one of the principal locations for the Gina Lollobrigida and Rock Hudson movie Come September (1961) so if you ever get a chance to watch it you will get a feel for what it was like in those days.

I had come, if I’m being honest, for the sea and the sun and, of course, the food but I didn’t spend all my time on the beach drinking tea and generally idling around.

Well, as I said, I didn’t spend all my time idling around on the beach, there were plenty of other places to while away the time in a languorously unhurried way. S.M.L. is a very pretty town quietly getting on with life in spite of all us wide-eyed visitors. The climate has made Liguria one of Italy’s lushest regions where exotic flowers and palm trees mix with intoxicatingly perfumed jasmine hedgerows and where the trees are laden not just with olives but with oranges and lemons too.

Ligurians have a special way with the exteriors of their houses decorating them elegantly in a traditional “trompe d’oeil” style where detailed painting compensates, maybe economically, with the absence of elaborately carved stone-work.

Some of the buildings are masterpieces of artificial perspective.

Their houses are works of art and beguile the eye with their tricks so that sometimes you don’t quite know if those windows are real or not.

The result is a wonderful mix of colours beautifully contrasted with the blue skies and vibrant greens of the foliage.

It is a real pleasure just to stroll maybe that’s why the Ligurians make such a point of keeping their streets so attractive. After-all slowly walking and talking on a pleasant evening seems to be what Italians like best.

I always savoured the ten minute walk every morning from my accomodation down through the town to the seashore. Well it would have taken ten minutes if there wasn’t always something to distract you on route.

I liked some of the old and less glamourous buildings too like these gnarled workshops with their solid but weathered oak doors.

Even the modern apartment blocks joined in the game of colours. People, well these Italians anyway, don’t seem to mind living close to each other. You really can chat to your neighbour across the road without leaving home.

My apartment was in an area known as San Siro which had once been the agricultural village nestling in the foothills next to the fishing port of Santa Margherita but now the two are co-joined with an invisible thread.  I enjoyed the down-to-earth atmosphere in this part of town often taking the first coffee of the day in its little piazza by the church of San Siro

This is where the local people congregated whether it was for the market, for a coffee or a beer or to let the children romp with that peculiar joyfullness that is not always apparent in Northern European streets. Sometimes though it is just quiet and you can sit  with your coffee and watch the shadows lengthen over the church.

Inside the church of San Siro is another world and an unexpected one too – Italian Baroque doesn’t go in for understatements and this small farming village had its own 17th Century temple to spiritual chutzpah.

The walls are decorated with a number of paintings from the Italian Baroque often with an emphasis on the gory side of saintly martyrdom. Coming in here when it was so hot outside, I identified more with those languishing plaster angels over the arches. San Siro, or Saint Syrus of Pavia, was reputed to have been the small boy who supplied Jesus with the five loaves of bread that he used to feed the five thousand in his most hospitable of miracles. San Siro obviously had a sensible Italian respect for good food.

Coming out again into the sunshine, I see those “trompe d’oeil” house fronts anew – they are merely another form of that Italian delight in decorative design.

When I reach the little town’s main square, my eye always goes to the statue of Giuseppe Mazzini (1805-1872), a Ligurian from Genoa and one of united Italy’s founding fathers who campaigned and fought for the unification of Italy living long enough to see his dreams fulfilled and to die a national hero. The affection with which he is still remembered is somehow illustrated by those golden oranges clustering in the tree next to his memorial.

Mazzini also believed that the natural consequence of a united Italy was a united Europe so I wondered what he would make of us Europeans today with all our self-imposed economic divisions.

A short walk later and I’m in Santa Margherita’s other great gathering point, the square outside the town’s main church, the Basilica of Santa Margaretha herself or Santa Margaretha d’Antiocha (Saint Margaret of Antioch) to give her her full name who may be as fictional as the dragon that is supposed to have swallowed her but who is venerated as the patron saint of childbirth after the “miraculous” way she was regurgitated  from the dragon’s stomach.

Everyone seems to pass through this square no matter where they are going or what they are doing even if they are not interested in the regurgitation of their patron saint. The square is the site of manhy of the town’s communal events, it holds regular markets, outdoor concerts and conferences and it is a place where it just feels right to linger with friends letting the church’s grand bells mark the passage of time.

Some folk seemed immmune to the strength of the sun…

..but luckily for me there is the splendid Cafe del Borgo on the edge of the square where it is possible to sit at midday in delicious shade for the next espresso coffee of the day. Here you can people-watch, (or is it people-bitch?) and admire the view and even, if you are lucky, listen to an alfresco concert. One night I sat there until late when a youthful and dynamic brass band played operatic music by Verdi, Rossini and Puccini reminding us just where Italian opera gets its inspiration.

The Basilica di Santa Margherita is, like the church of San Siro, a 17th century building in the fashionable Baroque style. 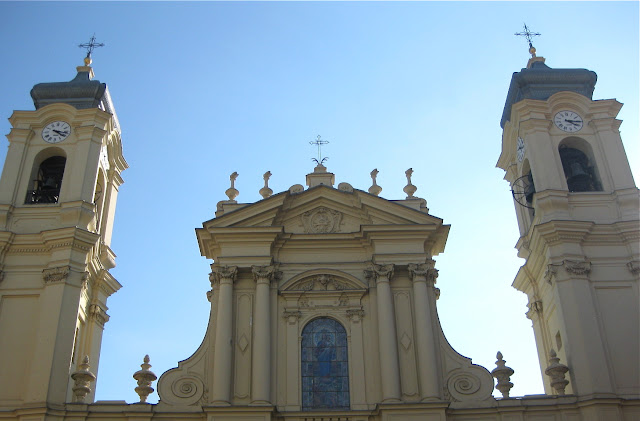 … and inside it is even more magnificent. You will love it if you think Liberace and Lady Gaga needed lessons in exuberance but if you are just a simple Englishman on a seaside holiday, it can, at first, take your breath away.

Nothing is left unadorned and the finished work is illuminated by rows of extravagant crystal chandeliers telling us, I guess, about the glory of God.

There are many gloomily realistic 17th Century Baroque paintings in the side chapels illustrating just how rough a time some of those saints had and sparing us few of the details of their bloody martyrdoms.

I am unfamiliar with the Italian painters who followed the great Renaissance flourishing and I am still not sure how much I like many of them but this one, Saint Catherine’s Mystical Marriage by Genoan artist Valerio Castello (1624-1659) captured my imagination with its gentle depiction of the saint and the Virgin’s love for the Christchild along with the wickedly barbed knives on Saint Catherine’s infamous wheel of torture decorously displayed under her skirts.

After all that extravagance and emotion, it feels good to walk down some of the little alleyways, carrugi, that are less “in yer face” but just as contemplative in their own way.

Italy does alleyways exceptionally well. They are places for adventures with a hint of danger and mystery when we don’t quite know where we are heading.

I love that feeling so quite often I just keep walking…

…often not knowing where I’m going….

..but drawn onwards by hints of the unknown…..

until I arrive somewhere new in a burst of sunlight.

Then it’s time for an Italian beer served colder than cold when you are ready to return to the world of people.

On such an evening, I did the journey in reverse starting in the little port with its mix of fishing boats and luxury cruisers just as the sun began to fade.

I was heading up the hillside for a classical music concert in one of the town’s monumental 17th century mansions but yet again, the landscape and its buildings were inspirational enough on their own in the fading golden light.

….walking to the hill-top above the town where another Baroque building, the Villa Durazzo (1676) with its ornamental gardens and classical statuary commands the view.

It is a fine place to visit during the day when you can wander through its parkland gardens and take coffee on its terrace but in the evening light I enjoyed it even more as somehow,  I always feel a building’s history more intensely in twilight.

The Villa Durazzo now belongs to the town after centuries in aristocratic hands and it is in the process of becoming a mix between museum, function room, concert hall and, increasingly, the place for a glamourous wedding ceremony.

One of the century’s most expensive weddings was held here in 2008 when the English footballer, Wayne Rooney married Coleen McLoughlin although most of the millions of pounds spent on the event was mostly to cover the cost of several days of partying on a luxury yacht also hired for the occasion. The singer Rod Stewart also married one of his many wives here at the Villa Durazzo.

I wasn’t here for a wedding though but a music recital by the two classical guitarists Mauro Bonelli and Andrea Leveratto who played excitingly virtuosic arrangements of music by J.S.Bach, Rameau and Piazzola with just a few blips when one of the guitars developed a  tuning problem.

Then it was  time for the descent down the hill with palm trees silhouetted against the evening blues of the Mediterranean.

Santa Margherita Ligure is a quietly seductive town once tasted never forgotten. Here is a parting momento, not those two guitarists I heard in the Villa Durazzo but the same music, the Gavotte and Six Variations by the French composer Jean-Philippe Rameau (1683-1764) but this time played by the excellent Zagreb Quitar Quartet reminding us just how well guitars can imitate the harpsichord for which Rameau wrote this music. Look out for some more of my Italian Riviera experiences tomorrow.