Those Chinese certainly know how to do gymnastics and it would be churlish of me, a mere Brit, to deny them their Gold medal victory in yesterday’s men’s gymnastic team finals at the London Olympics.

The Japanese too seem to have a natural flair for all that jumping around in the gym even though they’ve cultivated that bad boy punk look. They too deserved their silver medal even though they nearly lost it due to a couple of slips. 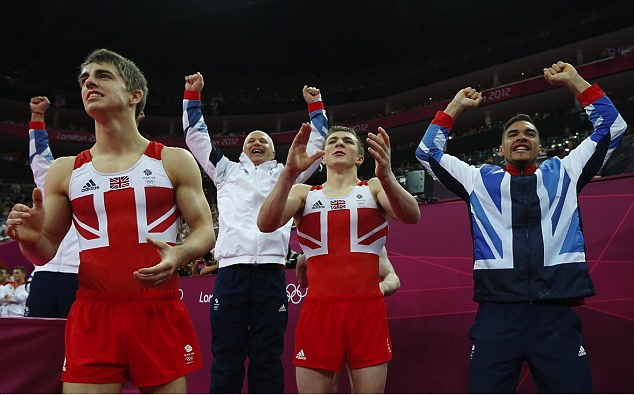 But, the mere Brit in me, had to celebrate the British team’s amazing victory in coming in third and winning the first Olympic medal for British men’s gymnastics for 100 years. It was doubly exciting because they just don’t look like those amazing Chinese and Japanese gymnasts – they were just ordinary lads doing their best. It was all rather in the spirit of the long to be remembered opening ceremony from last week. Very British in its informality and, yes, I have to say it, its refusal to make it look like a matter of life or death.

Max Whitlock on the pommel horse

Louis Smith on the pommel horse

Daniel Purvis on the rings

They almost made it look easy, all that standing on your hands, spinning in the air and hanging from those rings. It’s not of course, just try taking your weight on your hands sitting there at your computer reading this. See what I mean?

The victory went to those amazing Chinese who not only looked the part but seemed to have been born for it. Unlike me but I found it inspiring to watch especially with memories of the living Hell that was enforced school gym practice.

I suspect my gym teachers decided that there was no chance of me ever being good at gymnastics (they weren’t wrong) so they never really showed me how to do it. I remember the horror of just taking my place in the queue for that run of shame up to the pommel horse where I would usually just fall painfully to the floor. If I could do it all over again after seeing just how it has been transformed into a thrilling sport of such athletic and balletic skill, I might even have tried to master it myself.

I hope the new generation of children will be inspired by this the most unlikely of British triumphs.

I have been reminded, watching these Games, just how many sports I had to try over my school years and subsequently in various attempts to mastering something suited to my lack of real ability. I did boxing at school – it was the principal way of settling serious school boy disputes and had to be enacted in front of the whole school – terrifying. Later, learning Kungfu, I realized just how much I had enjoyed boxing and I’m proud to still have my red boxing helmet, red gloves and gum shield. I was gunning for Australian Damien Hooper last night not just because he is really good but also, well, he was wearing my colours.

In the absence of kungfu from the Olympics, I watched the Judo and enjoyed that bout between Jurakobilov and Dowabobo reminding me of the fun of Kungfu floor fighting. Sadly, after my serious illness, I’m not allowed to take part in this kind of rough ‘n tumble any more. Shame.

America’s astounding Michael Phelps didn’t really have to try to get through his feats yesterday but already he shows me that his idea of swimming and mine are as different as a dolphin is to a floating log.

Don’t even mention my attempts at diving – a belly flop was the best I could muster.  There’d me no disappointments for me if I was ever persuaded to go in for some synchronised platform diving. I just know I’d look a pillock before I started. I felt sorry for Britain’s Tom Daly and Peter Waterfield though – on a good day they can make this slightly silly discipline look poetic.

I was cheering for Zoe Smith, Britain’s most unlikely weightlifter who may not have won any medals yesterday but who broke the British Olympic record and showed, like the men’s gymnastic team, that Britain can produce athletes who can compete and win without losing their charm.

Yesterday’s winners and losers brought me hope that it’s still not too late for any of us to get at least some of that joy at our own fumbled attempts at whatever sport we dare to practise. I may be no good at any of them and I’ve failed at most of them but I can admire the skills that have brought all these brilliant athletes to London. Good luck to you all!