I haven’t joined in the debate about Scottish Independence until now because I just couldn’t make up my mind about next week’s referendum. I suppose it needn’t concern me as I don’t have a vote. It does concern me though. Like many residents of England, I feel and respect the Scottish blood that flows through my veins. I also feel a close connection to the Hebrides island of Islay where my father’s family can be traced back to the 16th. Century and, probably, beyond. I have only visited this beautiful island once in my life (so far) but it was enough to awaken those often sneered at sensations that effect people when they visit the land of their fathers.

I am often told that I am typically English and I’m never quite sure if that is meant as a compliment. My mother is English and from good English stock but my father was every inch a Scot. He was Scot enough and proud enough of his national identity to make sure that  we, his sons, were alert to our inheritance even though we grew up in Southern England – the land of my mothers.

My parents – an Anglo-Scottish union

My father was born in Scotland in 1896 and really he should have been my grandfather but he lived to be the patriarch of two families and I was one of the results of his second marriage. A late flowering in his eventful and migratory life. He was born at the perfect time to be a soldier in the First World War and at the age of 18 he was far away from Scotland fighting with the Argyll and Sutherland Highlanders in the bloody Gallipoli campaign (1915-1916) where he was wounded and where he saw all of his friends killed.

This 1915 photograph (below) of him on convalescent leave in Kelvingrove Park, Glasgow, is the last one taken of him in Scotland for 60 years. In 1975, two years before his death, I visited Glasgow with him and, somewhere in my loft, there’s a photograph of me and him standing in that same park. We talked about why he left Scotland in 1915 and he said it was a typical story of his generation. His friends killed, his mother remarried, his stepfather pleased to see the back of him,  even his “sweetheart’, a girl in Sterling, had given up on him and found a new boyfriend, nothing to stay for, and the British Army had plans for him in India.

At 19, after seeing the horrors of war, he was shipped to India, like all those other Scots who populated the British Empire, where he served in the Indian Army for thirty years seeing the  Second World War, the Burma campaign and the Partition of India. He wanted to stay in India as a civilian when his military time was up but his new English wife, my mother, wanted to return to England where I was born and where he settled for the rest of his life.
My father was always a reluctant English resident but he admitted that, after all those years in India, the climate in our family home in Sussex was infinitely preferable to those romantic Scottish mists of his home  country.  Now, of course, I wonder what he would have made of the Scottish Independence Referendum. In all honesty, I just don’t know. It is due to him that I grew up feeling British rather than English and it is due to him that I would feel a sense of bereavement if the two countries of my joint nationality are to split.

In the 1980s I took my two sons on a four week holiday to Islay,  the land of their fathers too. It was a powerful and memorable experience for all of us and it was inevitable that we would spend some time looking at grave stones. The last cemetary we visited, having failed to find any of our ancestors, was a tiny collection of stones on a small hill overlooking Loch Indaal. Grave or no grave, it was a suitable place to remember the generations of our family that had lived in these parts.

I was standing near a small grassy bump and idly kicked away at the turf feeling that there was a stone beneath. It was a gravestone and I scraped the grass away to read the inscription. One of those extraordinary moments of fate. The letters read: ‘This place belongs to Archibald Bell, Lyrabus.’ It was the grave of my great great grandfather, Archibald Bell (1786 – 1862) who had lived just down the road in a place called Lyrabus. 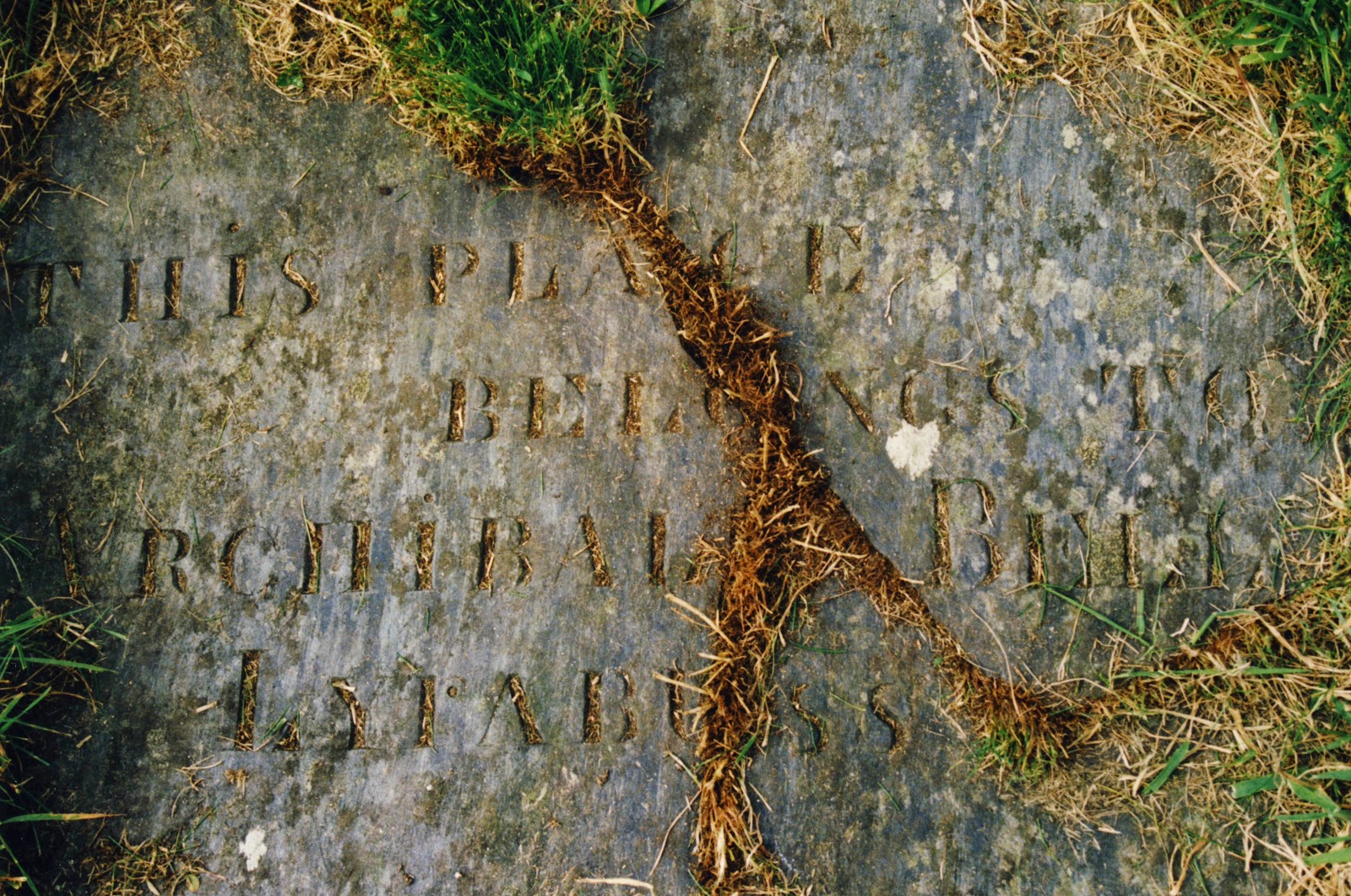 I could feel his pride in those words… ‘this place belongs to…’ I felt some of that pride and now believe that a little bit of that place belongs to me too and to my sons. No referendum will take that away from us.

My sons on Islay in the 1980s
Since then I have only been able to find one photograph of my Islay relatives. He is Donald Bell, my great uncle. I never met him but  his image has to stand for all my Scottish ancestors. I don’t intend to sever the link.