It was a great day to catch a train, yesterday. the sun was shining at Lewes railway station and the open rail which runs all the way up to London, about an hour away, was inviting me to go off for some fun. I was heading up for the opening night of a play at the Orange Tree Theatre in Richmond, a rather superior borough that sits south west of the capital and does very well for itself as a good place for rich city types to spend their down time.

Between Lewes and Richmond, on a moderately full train,  I and most of my fellow travellers were submitted to a protracted conversation between two members of a section of English society that has always been misnamed as “the silent majority.” A man and a woman, of a certain age and set very firmly in their image of middle class life in Middle England, carried on a conversation in penetrating voices about inconsequential matters laced with self-concsiously dropped titbits like “when I was church warden” or “darling, what would you do if you didn’t have me to tie your bow ties?” it was the noisy and rather hammy delivery style of these remarks that gradually let everyone in the carriage, lucky enough to own an iPod to, one by one, put on their headphones to cut out the blabbering.  I went for Joni Mitchell’s edgy album Don Juan’s Reckless Daughter and soon I was transported to a better place. I changed trains at Clapham Junction where I always think of the great Victorian playwright Oscar Wilde who was forced to stand one of the platforms in chains awaiting his transfer to prison after his notorious trial and where he would have been sniffed at by many a bow-tie wearing English church warden. Some things stay the same.

I was going to see a play by a lesser writer than Wilde, the once highly fashionable Arthur Wing Pinero (1855 – 1934) at Richmond’s charming theatre in the round, the Orange Tree which I first visited when they were doing a season of plays by one of my favourites, George Bernard Shaw.

It was the first night of the new season and the play was The Thunderbolt (1908), described by Pinero as “an episode in the history of a provincial family.” Not unlike, I feared, those ghastly people on the train.

Some time ago, I saw a good production of Pinero’s most famous play, The Second Mrs Tanqueray (1893) which definitely has its moments but I am with Shaw on this one. He labelled Pinero “a humble and somewhat belated follower of the novelists of the middle of the nineteenth century.” 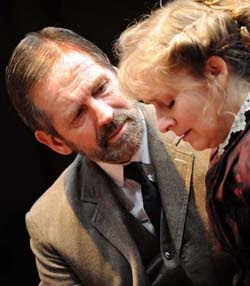 The Thunderbolt was more enjoyable than I expected even if its plot involving rather stock characters from a Northern English town took some time to engage me.  Pinero was at his best when expressing simple outbursts of emotion and there were some fine moments last night. In the end, the things that shocked middle class audiences in 1908, now come across as a lot of fuss about nothing. Except the question of money, of course, which is central to the story…..that will always be with us.

I was there at the invitation of my good friend Henry, a young theatre director who is currently working at the Orange Tree and, who not only got me a ticket but also insisted on buying me a pint of excellent London beer and an exceptionally traditonal ham roll in his local pub after he saw my envious expression when he arrived devouring a take-away snack.

The main problem with Pinero’s plays is that they are very very long. after three hours of Edwardian drama, I had to run for my train but miss my connection. That long wait on East Croydon station, watched by a curious mouse, was made much more palatable by a repeat hearing of Joni Mitchell’s wonderful album.