I was thinking about the faces hidden behind various masks in Afghanistan. It is easier to lump people together if we hide their facial features of course so these Taleban men pose for their photo as armed militants their humanity concealed.

These Afghanistani women too are hidden from our gaze. Preserving their modesty maybe or enslaved by their fundamentalist menfolk, what they are like underneath those scary robes, I have no idea. So it is easy to lump these women together too as victims or as fanatics – in their own way as dehumanised as those Taleban warriors.

Another set of uniforms constantly in the news belong to those American soldiers and their NATO allies. Here too, we are encouraged to lump these men together as troops, defending or invading depending on your point of view. They only become humanised when we see those photographs of young men in the newspapers marking their untimely war zone deaths.

It is difficult sometimes too to understand why the supposed enemy thinks the way it does. Easier when they are anonymous behind a mask but when they are smiling like this young Taleban fighter, I wonder if they are really just the same as most young men everywhere – full of excitement at life’s adventures and all too easily led astray by their more politically minded elders.

This young woman’s haunting face speaks for many Afghanistani people – innocence lost in a crazy out-of-control World asking for our understanding. Let’s try to make sure that she doesn’t have to cover herself up and hide herself away either under a burkha or just out of our other-wise preoccupied minds.

I was heartened then to hear that speech by Mr. Ahmet Davutoglu, the Turkish Foreign Minister who said in advance of talks with his British counterpart in London today, that we must all concentrate on normalising Afghanistan by developing a stable infrastructure, to create a five-year economic programme which would create jobs, reform education and agriculture and, hopefully, to end the drugs trade.

“We must persuade all to take part, including the Taleban,” he said meaning those “moderate” Taleban supporters that we never hear much about in our Western newspapers.

Mr Davutoglu’s moderate Muslim party were seen as a controversial element in European politics when it was elected to power but, so far, it has shown that it can be a force for reason and negotiation at a time when we are all in danger of taking extreme positions on the question of Islam and East-West relations.

Ahmet Davutoglu’s government needs our support and a lot of luck if he is to persuade many who seem unpersuadable to bring a peaceful negotiated peace to Afghanistan beginning with the Turkish inspired summit on 25th January when the Presidents of Afghanistan and Pakistan meet in Istanbul. 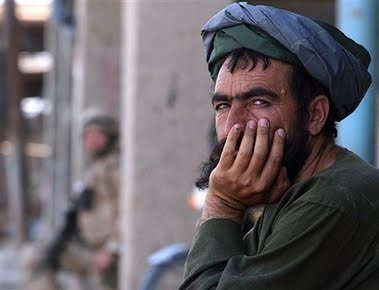 Meanwhile, what must this man be thinking, I wonder, waiting on the streets of Afghanistan. I suspect he is lamenting his fate stuck between opposing forces that have nothing to do with his preferred way of life.

Oh and on a trivial Southern English note, I thought the thaw had set in yesterday but the snow returned last night. This is my back garden this morning.

Turkey might just by the honest broker we need in Afghanistan

Titian’s Nudes are the subject of my new Fibonacci poems.

The Art of the Deal: Is there really nothing we won’t stomach for Saudi cash?